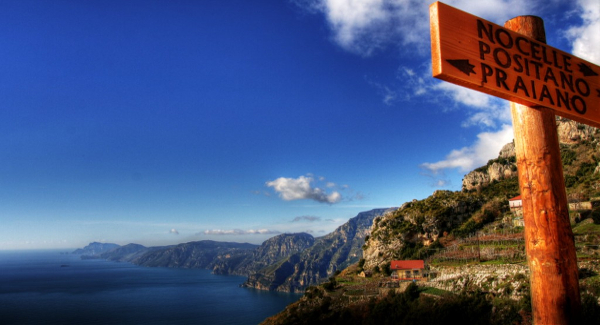 Duration: 6 Hours
Scale: 1 - 30 people
From: Sorrento Area
Tour size: 30
To: Positano - Bomerano
Categories: Shared Tour Hiking Group
Languages: English, Italian
Transportations: Bus Walking Minibus
The Path of the Gods takes us back in time, at the glory of the Greek period. Walking between heaven and earth, from the Path of the Gods it is possible to admire one of the most breathtaking panoramas on Earth.

The Path of the Gods takes us back in time, at the glory of the Greek period. Probably one of the most famous paths in Italy, this hike moves from Bomerano to Nocelle. Walking between heaven and earth, from the Path of the Gods it is possible to admire one of the most breathtaking panoramas on Earth: a stunning view of the coast which ranges from the archipelago of Li Galli at your left to the Island of Capri in front of you.

The Path of the Gods, despite the name, is also an extraordinary example of the work of human beings, who managed throughout the centuries to colonize even the most impracticable locations of the region. Walking in this spectacular scenery, there will be the occasion to meet local shepherds and farmers eventually. They still work and live in this little corner of heaven facing every day the difficulties of their hard job with passion and devotion, a trademark of the people here in Southern Italy. Through old vineyards, terraces, farmhouses and monasteries, suspended at 650 meters above the sea level, you will have the feeling to walk in a painting with an ever-changing landscape.

We have 2 different hike for the path of the gods, starting from Nocelle or Bomerano, our guides always choose the best route based on traffic, weather and season.

Among the “high” routes of the Amalfi coast, this hike moves from Nocelle to “Colle Serra” (and back) and is by far the most famous hike you can do. The reason for this fame (which is recognized all over the world) is the constant ups and downs, the fantastic sheer vertical drops and lands cultivated in terraces.

You arrive at the final destination and the highlight of this hike, Punta Campanella, which is united, under the sea, to the stunning island of Capri.

From the spectacular belvedere looking to the west we see siren archipelagos and swirling shapes. There is much to explain here regarding the colours of the Mediterranean lands, known as our “Path of the Gods”.

Need help booking? Talk to us!

STAY UP TO DATE